Though, according to the Cabinet Office's "Survey on Damage and Economic Loss due to Traffic Accidents (March 2017)", the economic loss from traffic accidents is estimated to be 14.76 trillion yen, and it can be said that damage caused by traffic accidents is still enormous. In the 11th Road Safety Basic Plan prepared in light of these circumstances and the "Report by the Road Transport Subcommittee of Land Transport Committee of Transport Policy Council (June 2021)" which was compiled in response to 11th Basic Plan, new targets for reducing the number of fatalities and reducing the number of serious injuries were set as new indicators.

JARI is investigating the conditions at the time of accidents using various analyzes of traffic accident statistics, crash experiments with actual vehicles that reenact actual accidents, and experiments that are reproduced on computers. In particular, using computer models of occupants and pedestrians is a safety research method we are proud of and has helped us attain many achievements in the development of safety evaluation methods and tools. In addition, we are actively engaged in research on the causes of accidents caused by elderly drivers, a recent social problem, bus operation safety, and automatic accident reporting. 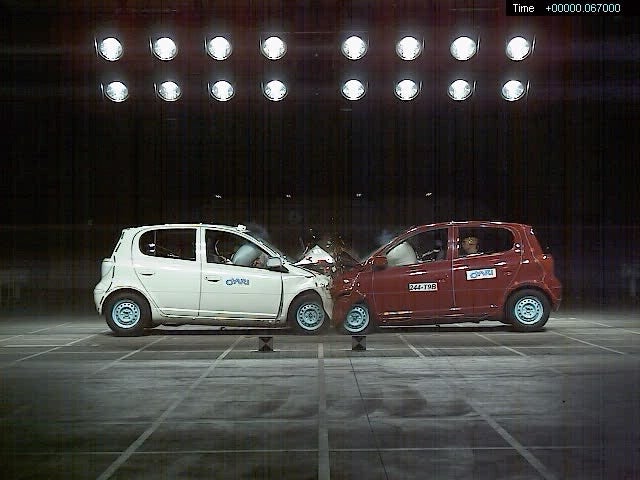 We started the automobile assessment business in fiscal 2014 to evaluate the performance of advanced safety technologies such as AEBS (Autonomous Emergency Braking System). So far, evaluation tests for vehicles and pedestrians (including nighttime) are being conducted by AEBS and include lane departure control systems, acceleration control devices when the pedal is pressed incorrectly, etc. In addition to the full-scale implementation of AEBS evaluations for bicycles from fiscal 2022, we are conducting research on driver reactions of various devices that are expected to interfere with driving in the future.

In addition to the conventional driving simulator, we have developed the JARI-ARV (Augmented Reality Vehicle) which has a better real driving experience, and also put into practice an Automated Driving Test Center, "Jtown", which is used for the development and evaluation of automatic driving technology. We are also developing simulation software that can predict the accident reduction effect when driving support devices and autonomous vehicles become widespread. For mobile vehicles, such as robots, we are conducting research on drone safety evaluation and risk assessment of delivery robots. In addition, at the "Robot Safety Center", a series of tests necessary for development such as a running test, an EMC (electromagnetic compatibility) test, safety tests on humans, and a strength test can be conducted.

In addition to these, we support various tests and research related to the active safety of automobiles, such as rolling resistance tests using tire test equipment, braking tests on proving ground, and other tests related to basic automobile performance. 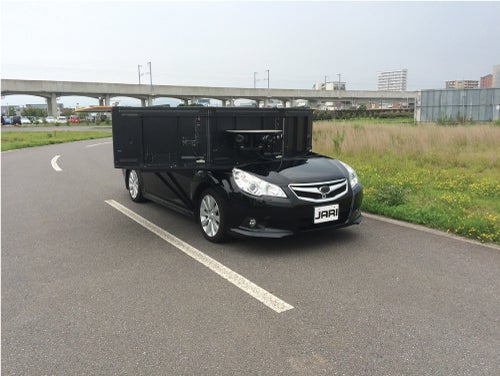 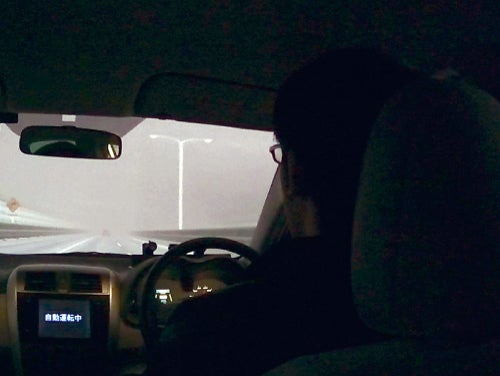 In addition to the head on crash testing with the test vehicle tugged to collide into a concrete wall or a barrier at a designated speed, JARI implements side and rearend crash tests and the tests simulating vehicle collisions with a motorcycle, a bicycle and a pedestrian. Vehicle crash tests with road structures are conducted at our special testing facility.

Using pneumatic impact testing equipment, JARI evaluates the safety and strength of test samples placed on a sled against impact. Sled impact testing is applied chiefly to determine the protective performances of child restraint systems and of automotive seats against whiplash.

Component testing is applied to various components of the vehicle body, and can be divided into dynamic tests involving actual impacts and static tests involving the application of a constant force to observe any strain and deformation. Dynamic tests outnumber static ones at JARI, as demand is growing for assessing the safety of pedestrians thrown onto the bumper, hood or other automotive components.

In the area of active safety, vehicles need to be evaluated with regard to their running, turning and stopping performances. JARI can undertake a diversity of tests on braking, visual field, lighting, tires, vehicle motion, driver assist systems. Our associated facilities and equipment include mock roads, driving simulators, and tire testing equipment.

Roadholding ability involves the basic vehicular motion of running, turning and stopping. The TRIAS braking test is mandatory for the registration of vehicles. Anti skid systems are tested using a steering robot, while there are a variety of tests dedicated to the assessment of tire properties at JARI.

In order for the above wide ranging tests to take place, it is essential to maintain and calibrate the necessary measuring instruments (e.g. accelerometers), sensors (e.g. load cells), data recorders, biofidelic dummies. At the same time, software needs to be programmed to elevate measurement accuracy. 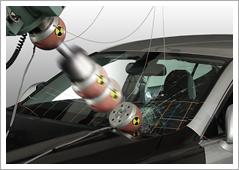 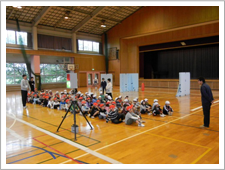 A scene of traffic safety education at school